Now that the dust is clear, Schalke has a new coach in Manuel Baum. David Wagner is history. Baum faces a herculean task to rejuvenate the club that thrives in old glory. Under the former coach, Wagner, the players were very insecure on the pitch. The insecurity led to a lack of coherent playing pattern. Schalke officials had to end the circus of excuses and alibis from the players and coach by pressing the reset button. The plan is with a new coach. Maybe it could bring a new era of better results.

Why did Schalke settle for Manuel Baum?

Schalke does not have the wherewithal to attract a star coach at the moment. The club is crumbling under the weight of 200 million Euro debt and counting. So, they had to look for a quick fix that will not break the bank. Enter Manuel Baum. An average coach with signs of promise in his short stint in the Bundesliga.

The COVID-19 crisis and poor management have exacerbated the problems in Gelsenkirchen. The battle to stay afloat is not only on the pitch but in finances, too.

Schalke needs to get back to winning games else the situation could spiral out of control. Baum is not a fanatic of a certain football philosophy. As a former schoolteacher, he analyses every game according to a flexible plan of action.

However, the uphill task he will face in Schalke is his debut game against RB Leipzig and subsequent matches ahead. He has to prove that he is competent enough to succeed in Schalke, where others have failed. In his presentation, Baum expressed his ability to function relatively good and fast in the atmosphere he finds himself at the moment based on experience.

Baum will work in concert with ex-player Naldo, appointed as his assistant. Naldo will act as a bridge between the dressing room and management. Success might be the possibility for Baum in Schalke. Then again, it depends on what Schalke fans define as success. 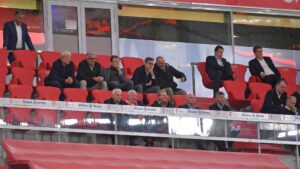