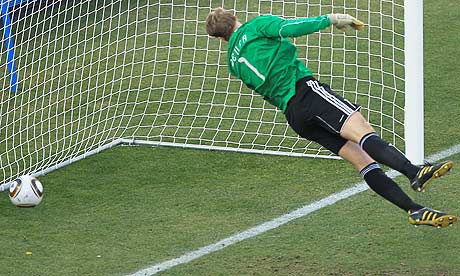 A Referee is expected to be impartial and fair in carrying out his duty on the field. As the invincible man, his “objective” judgment has far-reaching consequences for players, officials and spectators.

The match between England and Germany in Bloemfontein, was marred by the referee who failed to award a goal to England, although it was glaring that the ball crossed the goal line. it was history repeating itself, this time in reverse. Bloemfontein meets Wembley.

Hours later, Argentina played against Mexico. A offside goal was awarded to Argentina by the referee, who made an error of judgment.

The human errors from both matches have renewed calls for the introduction of technology in football. The mounting criticism of referees in South Africa indicate a big divide between expectation and reality. In my view, that is what football and life is all about.

Despite the high expectations we place on ourselves as human beings, in reality, we are not without flaws. Likewise, the teams on the field might expect to do their best on the field, only to realize that their best might not good enough. In a game of winner takes it all, the opposing team could either dash your expectations or confirm the reality that you are a winner.

The game of football enthuse passion because of the human element that is inherent in the sport. It is drama and suspense all in one.

Supporters for the introduction of modern technology in football like video evidence or football chip fail to understand the global nature of football. There is no other sport that attracts great interest from Timbuktu to London than football. It is the first globalized sport before globalization became a buzz word

Football in its rudimentary level  is not expensive. All you need is a pitch and the famous ball. The low-level of entry makes it attractive to both the rich and poor.

The harsh critics of football san technology are mostly from the west. Dr Markus Merk, a former FIFA referee, who i hold in high esteem, even suggested in an interview with FAZ that the three parties i.e the teams and the referee should have a maximum of 2 veto rights per game, where video evidence could be used. He added that we are living in the 21st century.

Yes, we are living in the 21st century, but in some parts of the world, many can not boast of constant drinking water or electricity. How do they expect those who do not live in the west to partake in the game ? Do not be deceived by the stadiums in South Africa for the world cup. They are not a reflection of the real football pitches in Africa and else where.

The preliminary rounds in the group games was not without controversy. Mali’s Koman Coulibaly, faced a barrage of attacks in the match between Slovenia and USA. He disallowed an obvious goal for America. I wonder what he saw or his interpretation of the scene.

Given that i am not privy to his match report, i will not quickly accuse him of incompetence.However, Deutsche Welle, summed up his performance:

Lacking the day-in-day-out challenge of calling games and feeling the consequent pressure at the highest level – and by that I mean Europe or the top leagues in the Americas (Brazil, Argentina, Mexico) – the likes of Coulibaly are simply not to be trusted at the World Cup. That they often fail is not their fault – it’s the biggest game they’ve ever called, and they are overwhelmed by the situation.

The writer had the temerity to suggest a radical  approach:

Maybe a referee from an outlier country should have to apprentice in a top league for at least a year, or call some minimum number of games there, before he is eligible for the World Cup. At the very least there needs to be a radical expansion of existing referee exchange programs that bring officials from football’s smaller federations to the big leagues to shadow referees. And those Bangladeshi and Namibian referees need to be put into league games too, once they’re ready.

The referee who made a rudimentary mistake in the Argentina versus Mexico clash is Roberto Rosetti from Italy. Jorge Larrionda from Uruguay was in charge of the Germany versus England clash. Therefore, the assertion that only those in top leagues should officiate top FIFA games is ludicrous and condescending.

It makes me wonder if we have different rules for football in so-called “developing” countries and “developed” countries.

The “football family” as Sepp Blatter like to call it, should remember that as a family, we might have issues, but we should treat each other with respect and dignity, irrespective of our expectation and reality.